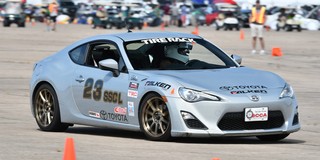 The youngest of four siblings, 2020 Wendi Allen Scholarship Fund recipient Samantha Bray grew up on a corn and soybean farm about an hour north of Omaha, Nebraska. Motor racing was not an activity of interest for Bray as a youngster. But while attending the Massachusetts Institute of Technology on her way to a degree in mechanical engineering, Bray discovered the school’s Formula SAE program. Involving herself with that team was what led her to become more familiar with the sport of autocross.

“While I was at MIT, they were working to make the team’s first electric FSAE car, and I was swept up in the experience from an engineering standpoint,” the 26-year-old member of SCCA’S Detroit Region recalls. “Working with a small group of people striving to build a car within a year was a memorable experience. Not only was I able to learn a ton more about vehicle dynamics, I was also able to bleed the brakes on a car for the first time and learn about brake bias and other fundamental principles that allowed vehicles to get people safely from point A to point B every day. Driving that car around in the alley behind our shop led me to want to pursue my newly instilled passion for cars and what I consider safer racing events.”

After graduation, Bray took an automotive job in Michigan and now works as a brake calibrator. Coincidently, her company started an after-hours autocross team at that time to get more people interested in the sport and increase driving experience. Bray gleefully joined that team in 2017 and attended her first SCCA® Solo® event in Toledo, Ohio. The following year, Bray upped her involvement with the newly formed team.

“In 2018, I became garage lead on the team so I could better learn what is needed to maintain autocross cars and prepare them for the grueling life of the sport, particularly shocked by the amount of tire wear the sport produces. That year was a blast, and I found out how much I love the sport and the other people participating. Then in 2019, I was elected to lead the autocross team, which was averaging more than 50 people at a practice and over 300 participating members in a season.”

Being involved with the team and the local SCCA region also offered Bray the chance to spend time learning challenges other women drivers faced. It was when riding with autocross drivers that she noticed many women new to the sport share concerns such as being apprehensive of the limit, spinning or breaking a car, stalling, getting lost on course or doing something else perceived as embarrassing. All these distracting thoughts, Bray reasoned, make driving at the limit even more difficult.

“Realizing this fact has helped me with my own challenges, and I enjoy sharing this insight so others may address parallel strengths and weaknesses,” Bray says. “I have a lot of interest in helping get new members involved in the sport as I think it’s a great way to get people to go outside their comfort zones and creates valuable skills that extend beyond autocross. SCCA changes people’s lives in more ways than imaginable, and I want to be part of helping push that forward in whatever capacity I can.”

As a means to expand her knowledge and get even more seat time, Bray spent part of 2019 racing a Scion FR-S in the Solo Spec Coupe Ladies class. She plans to continue competing in SSCL in 2020 while helping introduce even more people to the sport along the way.

Now in existence for seven years, the Wendi Allen Scholarship Fund provides each recipient $1,500 to support travel to Tire Rack National Solo events and the Tire Rack Solo National Championship. Additionally, SCCA waives entry fees for scholarship recipients to all Tire Rack National Solo events attended during the year, as well as work with the Solo community and commercial partners to seek out other forms of support for the recipients, such as driver training, mentoring, products and logistical assistance. Also, 2020 WASF awardees may attend a Tire Rack SCCA Starting Line school of their choice, which provides a full day's worth of performance driving instruction with professional driving coaches.