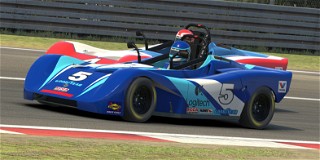 Here we are folks, only one week remaining in the SCCA® Spec Racer Ford Challenge, Presented by Skip Barber Racing School! You know what that means, virtually buckle your seatbelt and get ready for some great iRacing action as the drivers prepare their final dash for points!

Tommy Bordeaux is the current series leader and has extended his lead over Zachary Le Vey since last week. After trailing Le Vey for a good part of the season, Bordeaux’s determination and consistency is key for his current standing at the top. Le Vey will have to display some serious skills if he plans on making a run for first, and luckily for him he has the talent to do so.

The battle for third continues between Steve Owens and Brett Holton, with Owens slightly pulling away from Holton this week. Owens still has some work to do if he plans on keeping the third position as Holton knows what he must do coming into this last week of racing, and he is well within striking distance.

Further down the leaderboard Suraj Pradhan is making nice gains as he passes Zachary Rivard for sixth place, and Joaquin Effinger moving up the leaderboard to take the number 12 spot after only two weeks of racing. Drivers know that it all comes down to this! With only one week remaining in this series, its all or nothing as the drivers begin to undergo some bumper to bumper iRacing action! Keep your eyes peeled as nothing is set in stone!

Here are the current standings with position, name and points.

Want to get involved in the SCCA Spec Racer Ford Challenge iRacing series presented by the Skip Barber Racing School? Click here to sign up today! New to iRacing and want to get your rig started? Check out this article on how to get started into the fast action world of sim racing, including everything from a computer spec startup guide to physically getting your sim rig ready to go! With no greasy hands and maintenance bills, online simulator racing programs such as iRacing.com offer hours of unlimited practice with a broad spectrum of to-scale tracks and cars to get you moving fast!

Like (0) Dislike (0)
Comments
New comments can no longer be posted.